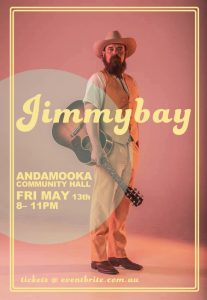 ‘After spending many years living in the red sands of outback South Australia Jimmybay decided to put music to his long told campfire stories and bush poetry. He left SA and travelled to the tropical north, taking only his suitcase kick-drum filled with his possessions and carrying his guitar. He slept in the long grass on the outskirts of Darwin and walked into town each day to busk on the streets. This was the beginning of what would evolve into Jimmybay performing at Festivals, including Illawarra Folk and National Folk Festival. Blues-folk-alt country vagabond Jimmybay has been travelling from town to town in his kombi van for the past five years. In that time this multi-instrumentalist has captured audiences with his honest storytelling style and mesmerising live performances. Drawing inspiration from his own experiences and stories told by other travellers. Utilising guitar, harmonica and his suitcase kick-drum Jimmybay’s music is sincere and raw.
8pm Friday, 13th May, 2022

Tickets: $20
Tickets are online and at the door