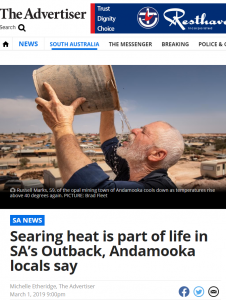 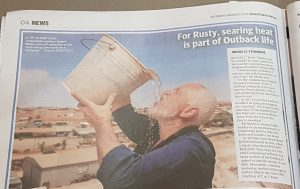 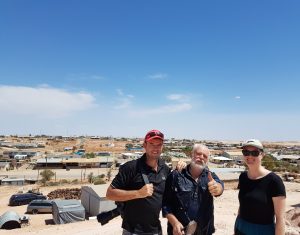 Russell ‘Rusty’ Marks, journalist Michelle Etheridge and photographer Brad Fleet from the The Advertiser visit the Andamooka Observatory and German Gull Opal Mine

Andamooka locals are fundraising for a community pool to help residents and tourists cool down. Tuckabox Hotel owner John Smirnios says the pool would be popular with tourists who can camp in the town for a small donation. “If we had a little kiosk there it would create jobs for people,” Mr Smirnios says. “It gets up to 49C in the shade here. “Every Outback community has a town pool except us. I feel sorry for the kids.”

Russell ‘Rusty’ Marks says he couldn’t be more used to the hot weather, having been born during a drought in Broken Hill. “I was six years old before I saw any rain and it scared the s*** out of me,” Mr Marks says. For the Andamooka resident, 59, Thursday’s forecast 41C maximum was nothing compared to the summer he’s faced already, with locals sweltering in the mid 40s for days on end. “At 41C, it’s not that bad but I wouldn’t be going and digging any trenches,” the maintenance man says. “I can handle it but the kids can’t — even walking home from the school bus, they’re sweating. “Our power bill doubles over summer. Unless you have a job to do, it’s stupid to be outside.” But for Mr Marks, he is among the Andamooka locals fundraising for a community pool to help residents and tourists cool down. So far they have raised about $20,000 towards its cost, which is likely to be about $150,000-$200,000. They hope the Federal Government will also kick in a large portion of the funding required to turn the dream to a reality.