Andamooka is famous for Opalised Fossils 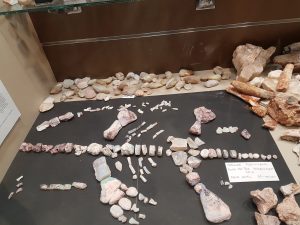 Andamooka is famous for Opalised Fossils.  Australia is the only place in the world where you find opalised fossils… the bones of a small carnivorous dinosaur species Kakuru kujani have been replaced by precious opal. Kakuru is a genus of theropod dinosaur that lived 110 million years ago during the early Cretaceous Period.

The fragmentary opalized tibia of South Australia’s only known dinosaur Kakuru kujani is from the Aptian Marree Formation in Andamooka. The fossilised bones are from the early Cretaceous period, about 110 million years ago. A fossil expert at the South Australian Museum said the Kakuru appeared to have been about 1-2m in length. The tibia is compared with those of 18 other theropod dinosaurs, and Kakuru is shown to be distinct from any known theropod.

Opals form in cavities in rocks. Cavities in rocks are often there because there was once a bone, shell or piece of wood there and the rock formed around it. The opal fills the space, forming a fossil replica of the once-living thing. Opalised fossils are rare. Opalised dinosaur bones are even rarer!

The Addyman Plesiosaur, “the finest known opalised skeleton on Earth” was found in Andamooka.

The number of known Australian dinosaurs is currently around 24