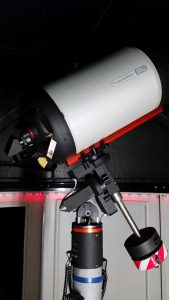 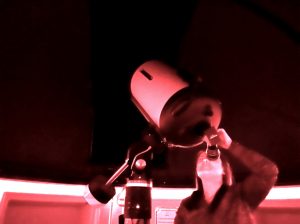 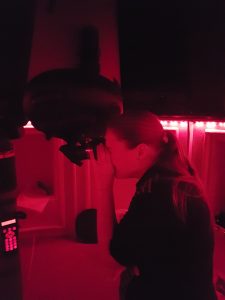 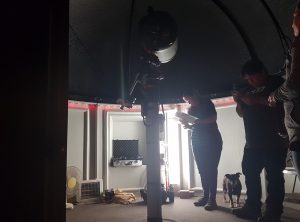 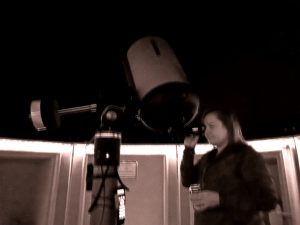 After weeks of waiting WBO and AO crew were able to test out the Woomera Baker Observatory’s  brand new telescope.

A faulty public telescope in outback South Australia has been replaced five years after it was damaged — and it came as a complete surprise. Woomera Baker Observatory volunteer Rebecca Tayler was holidaying in Tasmania when she received a confusing call from a telescope shop in Sydney. Ms Tayler was told the old and damaged telescope at the observatory, about 500 kilometres north of Adelaide, had been removed and replaced with an identical new model. “He just rang us up out of the blue and said, ‘Your new telescope is installed and ready to go’,” she said. “I thought ‘what new telescope?'” Ms Tayler said the original telescope was damaged several years ago when someone accidentally cracked its corrector plate. The plate is partly responsible for the optical quality of what is seen through the telescope. “When we rang up Celestron, which was the brand of telescope we had, they said, ‘You’ll never see a star again’,” she said. “We spent several weeks tweaking, fiddling, and we finally got it to the stage that we’ve had it for the last five years. “You could see some great stuff, but as soon as an expert got in there, they looked through the telescope and asked if there was something wrong with the optics. “But of course you couldn’t just replace the corrector plate — you had to replace the whole telescope.” Ms Tayler said the public telescope belonged to the Defence Department because it was located within the Woomera Prohibited Area (WPA), a military testing range. “We discussed this with Defence and it was the help of 20 Squadron [Royal Australian Air Force] that actually helped us put in a request to replace it,” she said. “But that would’ve been over two years ago. “The last update we got was that it hasn’t been cancelled or denied, but it’s really not moving anywhere either.” Ms Tayler said she suspected 20 Squadron was responsible for the switcheroo, given how helpful it had been. “I think with their help and a bit of a nudge on the paperwork, I think the boys have managed to get it through,” she said. “Anything that happens to the telescope has to go through them, because it belongs to them.” A Defence spokesperson said the request was recently approved and the new telescope was installed on March 6. “RAAF Woomera, with the support of local volunteers, host stargazing observatory nights for the public and visiting military units, and are pleased that the new telescope will be used for many years to come,” they said. The observatory volunteers are very happy with the new equipment. “This has been five years of fingers crossed and praying, telling everybody we know that we need a new telescope, and all of a sudden it’s just arrived,” Ms Tayler said.

Read  the ABC’s article about the ‘surprise telescope’!