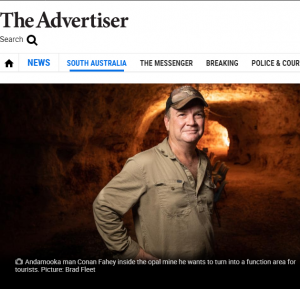 An Andamooka businessman is hoping his plan to open a disused mine to tourists will pay dividends for the Outback town. Conan Fahey, who also operates the town’s observatory, hopes to turn the mine, registered to his name, into a new venture to help cement Andamooka’s place on the tourist map. It was hoped that dinners could be served inside the mine, which is already decked out with a long table, lights and chairs. “It’s going to be a cracker – it will be crazy down here,” Mr Fahey said. “It looks fantastic with all the fairy lights on.” The mine would link up with his astronomy venture, allowing tourists and students to experience both in one visit. “Mars simulation” exercises for children and adults could be offered, where people could dress up in faux spacesuits. “There’s such a thirst for astronomy these days – we do a radio show on regional ABC, and we’re getting heaps of response from that. “The Woomera observatory gets about 60 to 90 people on Friday nights, so there’s other towns smashing it with tourism.” All Mr Fahey needed now was to do minor works, including creating a large door to the mine’s entrance, and to secure the relevant insurance and government approvals to set up the venture. He said the town had not had a mine open to tourists since the 1990s. Mr Fahey also hopes to build a new observatory building, to help draw more people to Andamooka. The town is home to about 300 people, about 30km from Roxby Downs. Mr Fahey is attempting to raise about $60,000 to help turn the observatory dream into a reality. “At the moment we have four scopes up here and we just bring them out and pack them away,” Mr Fahey said. A Go Fund Me campaign was last year launched for the project, raising $6800 so far. “It’s hard in a small town because you’re fundraising for so many things,” Mr Fahey said. “(But) by hook or by crook we’ll have an observatory up there.”